Knock knock burglars – how to prevent home invasion using security screen doors.  I would like to share an incident that happened to my family about two weeks ago:
My daughter and I were working on the computer in the front living room late at night around 11:30 pm.  Some gang banger knocked on the front door and we did not open the door.  It’s like they want to say knock knock burblar and expecting me to say who’s there.  We have one of those small hinged peep doors. Not knowing who it was, I proceeded to open the small opening to look outside.  Additional knock knock burglar cases posted.  Check it out.

There was a young man standing there

There was a juvenile delinquent standing there in his late teens to early twenties and he was dressed in a dark hoodie.  Then, I had surprised him by only opening the small peep door. He didn’t know that the peep door was there, because it was concealed by our Christmas wreath that was mounted around it. Either way he was not expecting it! He then asks me “Ummmm Ummm is there a park right here?”  So, I responded, “What do you want?! There isn’t any darn park around here! What do you really want?!  It’s 11:30 at night and why are you knocking on my front door this late?!”

Another person riding a bike 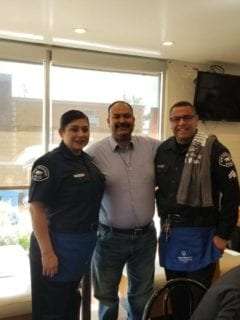 In addition, I noticed that there was another person riding by on their bicycle, and he was  wearing dark clothing too.  Then I totally realized that this guy with his homeboys were going to attempt to rob us!!  If I had opened the door, they would have pushed their way in by home invasion.  He kept moving his hands in the pockets of his hoodie and I couldn’t tell if he had a gun or a knife.  Right away I knew that this was a serious situation. Everything was in slow motion as my adrenaline was pumping. He then proceeded to ask, “Well isn’t there a park on…..” He named the cross streets. I responded with “Yes, if you know the area then, why are you knocking on my door and asking me?” He then took off running as fast as he could up our street.

My wife and my oldest daughter went out to the car approximately 15 minutes before.  She saw somebody sitting across the street on the curb wearing dark clothing.  It is my conclusion that this person assumed that there were only two females in the house and they thought they could somehow attempt robbery!  They did not expect a man to answer the door, but I assume that they were expecting someone to actually open the door.  I also assume that they are not very smart!!!  You have got to be one dumb gang banger to expect someone to open the door so late at night!!!

Finally I called the Police to report the attempted robbery!  So, they sent out a couple of officers to assess the situation. They were going to have squad cars patrol the area to keep an eye out for suspicious activity.  Now I know that these types of burglars are known as “Knock Knock Burglars.”  Many news stories are published about this type of home invasion, and on one article it documents that many gangs are known to commit this type of crime. Shaking my head from side to side!!!  Therefore, after the police left, I realized that I need to install a security screen door. Why not?  My own company offers security screen doors and we install them all the time!

Pick up the phone to contact me directly because you require a security screen door just like I did! I can always be reached at steve@bestcustomscreens.com or visit my website at www.bestcustomscreens.com for our company contact information.  So, make sure to order online at Security Screen Doors

IDAHO FALLS — An Idaho Falls man was arrested Sunday after an attempted assault and burglary that was caught on a home security camera. The video shows Shamel wrestle the man to the ground.

Three men were in custody and a fourth was free on bail Tuesday after being arrested for allegedly staging a knock-knock burglary in Monterey Park and detectives believe they may be responsible for other similar crimes.

“The detectives saw the suspects, who were in two vehicles — a white Mercedes-Benz SUV and a silver Chevrolet SUV — driving slowly through quiet residential streets,” according to a sheriff’s department statement.

“Detectives located the Mercedes-Benz parked along Floral Drive where the driver was observed approaching the front door of the victim’s home, in an apparent ‘door knock’ tactic. He then returned to his Mercedes-Benz and remained seated. Detectives then saw the Chevrolet arrive and park nearby, and saw two additional suspects exit that Chevy SUV and walk to the rear yard of the victim’s property.

“Shortly thereafter, those two suspects are seen quickly walking out of the front door and re-entering their SUV. Both vehicles simultaneously pulled away from the victim’s residence and left the vicinity.”

Detectives confirmed a burglary had taken place, having found a rear window forced open and the inside of the home ransacked, and coordinated with police units to stop the vehicles, officials said.

The Chevrolet was pulled over and three suspects — 40-year-old William Robinson, 42-year-old Kedrick Daniels and 37-year-old Kevin Green, all of Los Angeles — were detained.

“Detectives recovered stolen jewelry, currency and a police radio scanner from within the vehicle,” according to the sheriff’s department.

The Mercedes-Benz was ultimately located in Vernon where the driver — 32-year-old Frank Tisby of Los Angeles, who investigators say had been seen knocking on the victim’s door — was detained without incident, officials said.

Green, who had been driving the Chevrolet, was booked on suspicion of residential burglary. Investigators say he “has a significant criminal history including arrests for burglary and narcotics violations” and is a convicted felon and documented criminal street gang member.

“He has multiple felony convictions and would likely be a third strike candidate facing life in prison upon additional conviction,” according to the sheriff’s department. “He is also a documented South Los Angeles criminal street gang member.”

Daniels, described as a documented gang member, was booked on suspicion of residential burglary and has a record of prior arrests on suspicion of theft, conspiracy, narcotics and weapons violations.

Tisby, a twice-convicted residential burglar who was also described as a documented gang member, was booked on suspicion of residential burglary and is facing a third strike if charged and convicted, according to the sheriff’s department.

“This crew is suspected in burglaries throughout Southern California, and the Los Angeles County Sheriff’s Department’s Burglary-Robbery Task Force is working closely with” police in determining if other recent residential burglaries may be associated with them, officials said.

Green was released on Saturday after posting bond, while Daniels, Robinson and Tisby were all being held in lieu of bails exceeding $1 million each, according to the sheriff’s department.

Anyone who recognizes the suspects or their vehicles, or who believes they may have been victimized by them, was urged to contact the Burglary-Robbery Task Force at 562-946-7187 or brtf@lasd.org.

Anonymous tips can be submitted through Crime Stoppers at (800) 222-TIPS or lacrimestoppers.org. 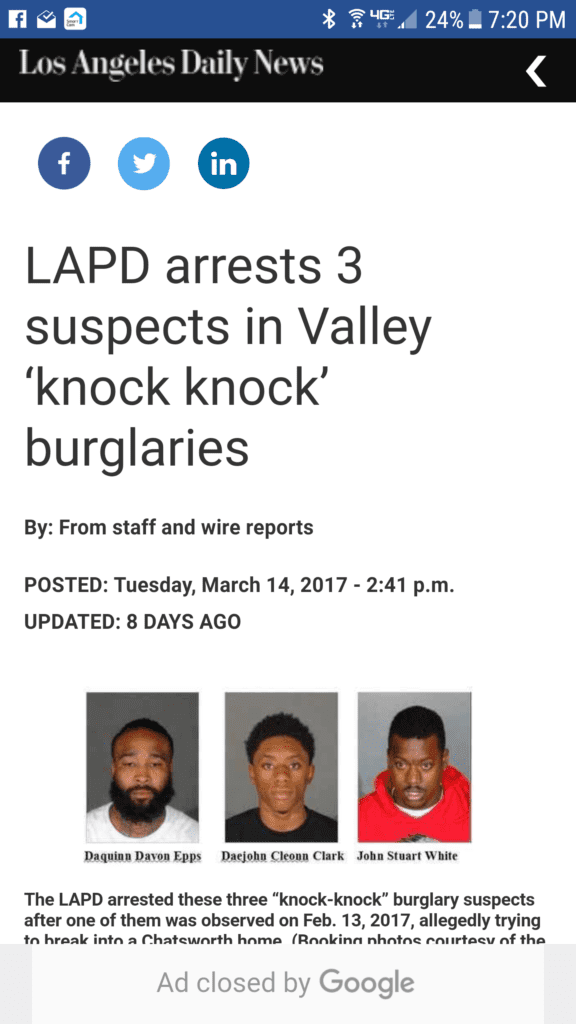 Police say that some of the men who were arrested stated that he would be out of jail in a couple of days and would come back to the same area to commit burglaries.  He even said that he would not spend more than six months in jail.

LAPD investigators believe that of the 1,000 burglaries reported in the department’s West Valley Area last year, that approximately 25% of them were organized knock knock type burglaries. Celebrities Nicki Minaj, Derek Fisher, and Yasiel Puig homes were involved in burglaries recently.

When the task force was announced last Friday, police did not say it was in response to the burglaries at celebrities’ homes. In any case those incidents did involve thefts of hundreds of thousands of dollars’ worth of jewelry.

“We need community members to call the police when they observe suspicious activity in their neighborhoods,” LAPD Capt. Rafael Ramirez said in a statement. “We have dedicated every available resource to identify, track and arrest this type of criminal behavior occurring in the San Fernando Valley.

While there have been a rash of burglaries in the west San Fernando Valley, police could not say whether they were the work of one crew, or even if the celebrity burglaries were connected. Police say the burglars are usually made up of gang members from South Los Angeles and typically target affluent single-family homes on the likelihood they have money, jewelry or firearms.

They knock on the front door to determine if the home is empty.  They’ll come around the back to break in and usually in and out in less than 5 minutes.  Professional burglaries must be a new career in crime.  I wonder if Al Capone had this idea back in the day?

I remember when this almost happened to us

We wrote a blog about the knock knock burglars who attempted to gain access to our house when we were home.  Those punks ran off, after I scared them.  I am glad I was home.  Check the article from last year.

Knock knock burglars – how to prevent home invasion using security screen doors.  I would like to share an incident that happened to my family about two weeks ago: 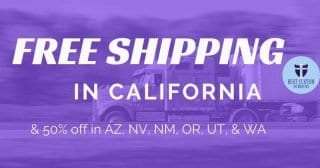 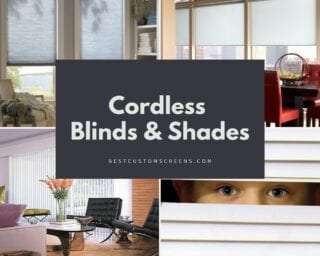